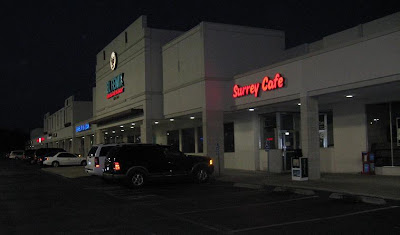 As we approach Halloween, I am reminded of the tall tales, ghost stories, and legends one hears in childhood around the proverbial campfire. Such stories oftentimes involve two teenagers (either two friends or a boyfriend and girlfriend) who veer from their usual path only to find themselves lost in the woods or in an old house where they encounter evil in one form or another. I vaguely remember one such story that involved something about a hook hand on a doorknob or some such silliness...

I mention these tales in this forum because it recently occured to me that, in the years since 1988, the Madison/Smalley case has become just such a "campfire" story in the minds of many. Case in point: thanks in large measure to the pre-2009 media, I have lost count of how many people have mentioned to me in the last year and a half how it always disturbed them to think about Stacie Madison and Susan Smalley being abducted by strangers and having the most salacious and sordid of fates befall them, such as being sold into prostitution in Mexico.

For those who do not know, this particular premise stems from nothing more than gossip. (Specifically, as recounted in a March 1998 article in The Fort Worth Star-Telegram, "A man who identified himself as a behavioral psychologist reported his 'feeling' that the teenagers crossed the Mexican border near San Diego with two men a week after they disappeared.") Yet, today this theory has been incorporated into many of the various missing websites that include entries about the girls.

Those who have read This Night Wounds Time know that I dismiss the likelihood of this possibility, along with the notions that the girls were:

... abducted by aliens from outer space, spirited away to Mexico and sold into prostitution, had gone to South Padre Island to marry boyfriends, had fallen victim to a roving serial killer, were sacrificed by Satanists in honor of the Vernal Equinox, or murdered as part of an illegal organ harvesting syndicate operated by Dallas bikers and Mexican crime lords. (p. 117)

The police officers I interviewed concur with this opinion; as I recount in the book:

When I asked Captain Greg Ward about this odd assortment of suppositions, particularly the gossip regarding the girls being transported to Mexico for forced prostitution purposes, his opinion was, "There’s a lot of speculation about what happened but, in my law enforcement career, I’m not aware of anybody from the United States, the Texas area, who was abducted and sold for what they call 'White Labor.'" When presented weeks earlier with a question regarding the rampant speculation surrounding the girls’ disappearances, Sergeant John Crawford had offered a similar response and added, "Everybody’s got a little angle on something." In other words, our television and tabloid-driven society has a tendency to reject plausible and likely explanations in favor of those which are more sensational and exotic. (p. 118)

In this regard, my assertion - based upon the research I conducted while writing the book - is that the evil Stacie Madison and Susan Smalley encountered on the night they disappeared was no stranger but instead someone known to and trusted by them. And this truth is far more frightening than any "campfire" tale anyone can manufacture.

In July of 2010, Joel Payne, the detective currently assigned to the Madison/Smalley case, told The Dallas Morning News, "What I need is something somebody's been holding on to for 22 years."

If you or someone you know has any information (no matter how trivial) regarding the disappearance of Stacie Madison and Susan Smalley on March 20, 1988, please contact the Carrollton Police Department at 972-466-3300.

Posted by Shawn Sutherland at Friday, October 29, 2010 No comments: 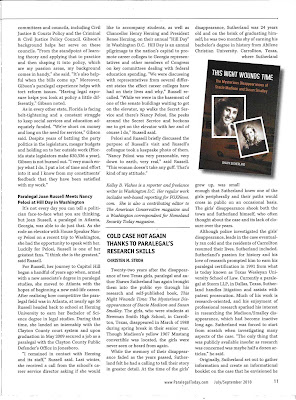 The Madison/Smalley case is currently featured in the July/September 2010 edition of Paralegal Today: http://www.legalassistanttoday.com/

Double-click on these images to see full size versions of these pages. 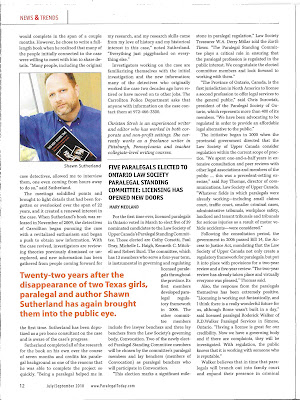 Posted by Shawn Sutherland at Wednesday, October 20, 2010 No comments:

Over the course of the past few months, I've been asked a couple of times why "disappearances" was used throughout This Night Wounds Time in place of the more grammatically proper "disappearance."

This was a conscious choice made for two reasons:

(1) Two individuals (not one) disappeared on March 20, 1988 and, although it is presumed that such occured during one collective event, two separate families (not one) were consequently devastated. Accordingly, in this instance, the use of "disappearance" diminished and mitigated the ways in which the mystery of that night impacted both the Madison and Smalley families and continues to affect them two decades later.

Therefore, the word "disappearances" (plural) as used in the book is intended to be synonymous with "deaths" and/or "murders."

Chapter 19 of This Night Wounds Time is available for review in its entirety at http://www.missinggirlsbook.com/Chapters.html

Posted by Shawn Sutherland at Friday, October 01, 2010 No comments: